“The hardest day of my life so far. Saying goodbye to the one constant man and hero in my life. 24th July 2014 at 8:15am My Grandad Ronald (Ron) Prett passed away. My comfort lies in that I was by his side and holding his hand as he gained his angel wings.” 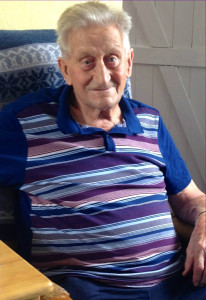 This man is my Grandad Ronald James Prett. Sadly he passed away on 24th July this year – it was peaceful and he was holding my hand the whole time.

My Grandad was very special, he was the one always there for me when I was poorly despite being 91 himself. He would always think of little ways to make it better and when I was in hospital or too poorly to see him he would ring me every day.

Ron was a Farmer, and very proud to have worked on the farm all his life – from the age of 14 – 75 that is what he did. He saw 3 new bosses who lived out their generation and still kept in touch with many of the workers – most of whom passed before him. He was a well respected man. He was a hard worker on the farm and at home. At work he worked with pigs, sheep, cows and horses. Watching them, moving them to market and using them as the tools of the trade – ploughing fields with the horses. It wasn’t till the last decade or two of his working life that he traded the horse for the tractor and combine which I remember him coming home from work with at lunch time then driving it back to work! He was old school, gentleman, loving and my hero.

When having to sort out arrangements and the subject of funeral flowers came up, my nan age 90 informed everyone whilst making me cry that direct family flowers only, and he was so passionate about the charity work I was doing she and him had discussed and they both wanted donations to go to

He helped me in life and through his wishes and memory he is still helping me and the health of me and many others to this day – even though he is gone – typical him, xxxxx